Many travel companies said domestic tourism is recovering quickly, and even a number of tours for the South Liberation and National Reunification Day (April 30) and the May Day holidays have been fully booked. 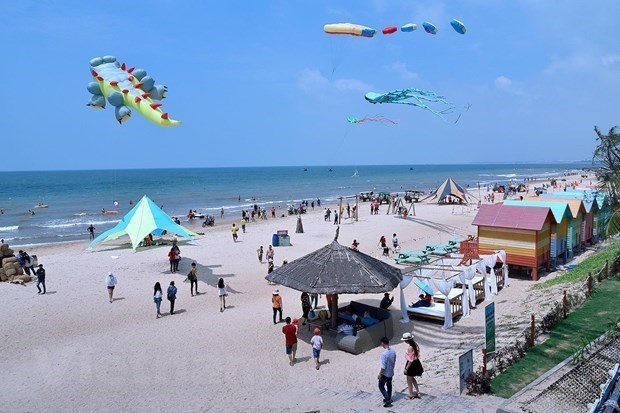 A beach in the central province of Binh Thuan (Photo: VNA)

Hanoi (VNA) – Many travel companies said domestic tourism is recovering quickly, and even a number of tours for the South Liberation and National Reunification Day (April 30) and the May Day holidays have been fully booked.

Thanks to the containment of the latest COVID-19 outbreak that began in late January, the number of domestic travellers booking tours and combos has been growing strongly.

Nguyen Nguyet Van Khanh, Deputy Director of the marketing division at Vietravel, said since early March, her company has carried out a new programme in which clients booking four- or five-star resort rooms for two or three nights for trips in March and April will be offered round-trip tickets priced from only 990,000 VND (nearly 43 USD) for certain routes of Vietravel Airlines.

This enterprise reported that the number of visitors rose five-fold during March 1-7, and most of them selected destinations in the Central Highlands, the central region, and Phu Quoc Island for their holidays.

Doan Thi Thanh Tra, head of the communications division at Saigontourist, noted that for travel businesses, the domestic market is still their lifesaver in 2021.

Tour prices at present are “very good” compared to the pre-outbreak period as hotels and restaurants are offering the best prices while service quality is still maintained, she said, adding that Saigontourist has also seen a large number of clients asking for information or booking tours and combos for the coming national holidays in late April.

Besides, flight tickets have also been discounted to the lowest possible level, according to Dau tu.

Vietnam Airlines and Pacific Airlines has sold tickets for the domestic flights conducted between February 19 and December 31 this year, except for some peak times, for only 88,000 VND, or 567,000 VND including tax and fees. Passengers can change tickets for unlimited times before the flight date, with the change free of 500,000 VND per ticket.

Apart from travel companies and airlines, many localities have also been launching a wide range of activities to attract visitors this summer.

Da Nang city, a tourist magnet in the central region, is set to organise the Danang By Night programme on April 30 featuring numerous events like artistic lighting on the Han River and its banks, bridges, and some skycrapers; night-time travel activities at the An Thuong tourism zone; and music shows at many places of interest.

Hanoi capital is scheduled to hold a travel stimulus and culinary festival on April 14-16 at the pedestrian zone around Hoan Kiem Lake.

Meanwhile, businesses in Ho Chi Minh City has also recorded positive signs when the number of people with travel demand is recovering, Chairwoman of the city’s Tourism Association Nguyen Thi Khanh said, adding that many of the association’s member companies have inked contracts with hundreds or even thousands of clients for trips through April.

She noted that residents in HCM City love travelling, so a demand rebound is inevitable after a long period of staying at home due to the coronavirus outbreak./.